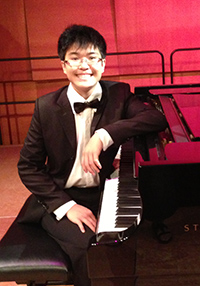 Ethan Chen, a 17-year-old pianist, has been studying piano with Lorraine Wu since 2009 and currently studies with Marietta Orlov at the University of Toronto. In 2014 he was the winner of the Grand Prize of York Region Music Festival and the President’s trophy Competition at Kiwanis festival of Greater Toronto in which he also performed at the George Weston Recital Hall at the Toronto centre for the performing arts. He recently became the 2nd prize winner at the 2015 Canadian Music Competition national finals. His other numerous prizes include first prize in 2012 Provincial Music Festival held by Ontario Music Association and the Most Promising Trophy in CCC Toronto Piano Competition. He has performed in various venues around the GTA including Cosmopolitan Music Hall and Richmond Hill Centre for the Performing Arts. His orchestral debut took place in 2012, where the young pianist performed Beethoven Piano Concerto No. 1 with Etobicoke Philharmonic Orchestra. This is his second time performing with the Greater Toronto Philharmonic, the first being Schumann’s Piano Concerto in a minor op. 54. Additionally, he has also worked with Professor Zenon Fishbein in Manhattan School of Music in New York and Chopin competition prize-winner Edward Auer in Jacobs School of Music of Indiana University in summer 2013 and Marc Durand at Orford Academy in summer 2014. He has also worked with renowned pianists of Europe such as Paul Komen, Yoram Ish-Hurwitz, Juan Zurutuza and Igor Roma.