This program will feature three young soloists who are winners of the 2018 North York Music Festival concerto class competition performing as soloists accompanied by a full orchestra in what may become a key step in the development of their careers. Our conductor Maestro David Fallis who served as a judge at the festival has selected the soloists with the orchestra: J.J. Bui playing the 1st movement of Beethoven 5th piano concerto, Godwin Friesen playing the first movement of the Schumann's piano concerto, and Eena Yoon playing the first movement of the Dvorak cello concerto. In addition the orchestra will perform Grieg's Peer Gynt Suite. 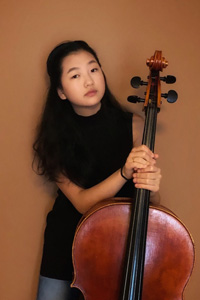 Eena Yoon is a fifteen year old cellist, who lives in Toronto, Canada. Her passion for music began at the early age of three, where she started off her music career by learning the piano. Shortly afterwards, Eena began learning the cello at the age of seven and began studying with Ashley Choi. Currently, she is studying at the Royal Conservatory’s Phil and Eli Taylor Performance Academy for Young Artists with David Hetherington, and is also privately studying with Andrés Díaz.

Eena has also been able to study at many summer festivals and has been a scholarship recipient at the National Arts Center 2018 Young Artists Program, and has participated in the Curtis Summerfest, where she was able to reach the final round of the Curtis Summerfest Concerto Competition. Eena has attended several masterclasses and studied with many leading musicians such as, Hans Jorgen Jensen, Fred Sherry, Soo Bae, Carole Sirois, Priscilla Lee, Natalie Helm and even chamber classes with Roberto Diaz. 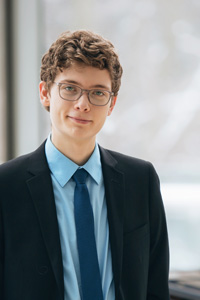 Godwin Friesen’s love for music began with performing regularly in the Friesen Family Band, which recorded three albums and toured across the country. In 2015 he placed first at the National Music Festival, and received the national Senior Mary Gardiner Award in Canadian contemporary music. In 2016 he played Saint-Saëns’ Carnaval des animaux with the Saskatoon Symphony Orchestra. Godwin has returned home twice this season to perform concertos with the Saskatoon and Regina Symphony Orchestras. Last June, he was one of ten pianists to compete in Milwaukee’s PianoArts Competition, where he won the Audience Communication Award. Godwin’s first composition for orchestra, Pilgrimage, was premiered by the Saskatoon Youth Orchestra last spring. He is a regular keyboardist in worship at Toronto’s C3 Church and at Saskatoon’s The Rock. Of the many interests Godwin practises, one of his favourites is five ball juggling. He is currently studying on full-tuition scholarship at The Glenn Gould School in Toronto, under the direction of John O’Conor. 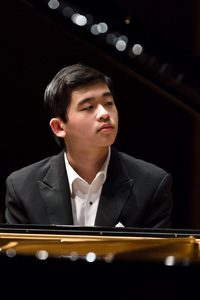 14 years old J J Bui began to take piano lessons at the age of five. He is the current full scholarship student at The Phil and Eli Taylor Performance Academy for Young Artists study with Michael Berkovsky.

J J Had his first solo recital at the age of 11 and he has performed in the venue in Four Season, la Maison Symphonique, Oakville Performance Arts Centre, Richmond Hill Performance Art Centre, Ritz-Carlton in Montreal, Chinese Culture Centre of Greater Toronto, The First Ontario Performance Art Centre in Milton and Koerner Hall in Toronto etc. He has participated in various music festivals, including Ottawa Music Summer festival in 2016, Music @Melon in the United States 2017, Toronto Music Summer festival 2018 and Hanoi Music Festival in Vietnam 2018.

J J is active in the chamber music performance; his piano trio group together with Vivian Kukiel and Matthew Christakos had won the National Music Competition in 2018 and also performed in many occasions includes The Royal Occasion 10 year’s celebration in Koerner Hall Toronto. J J and his sister Lindsay Bui also formed the piano duo ( Piano 4 hands) and won the top prize in the national competition.